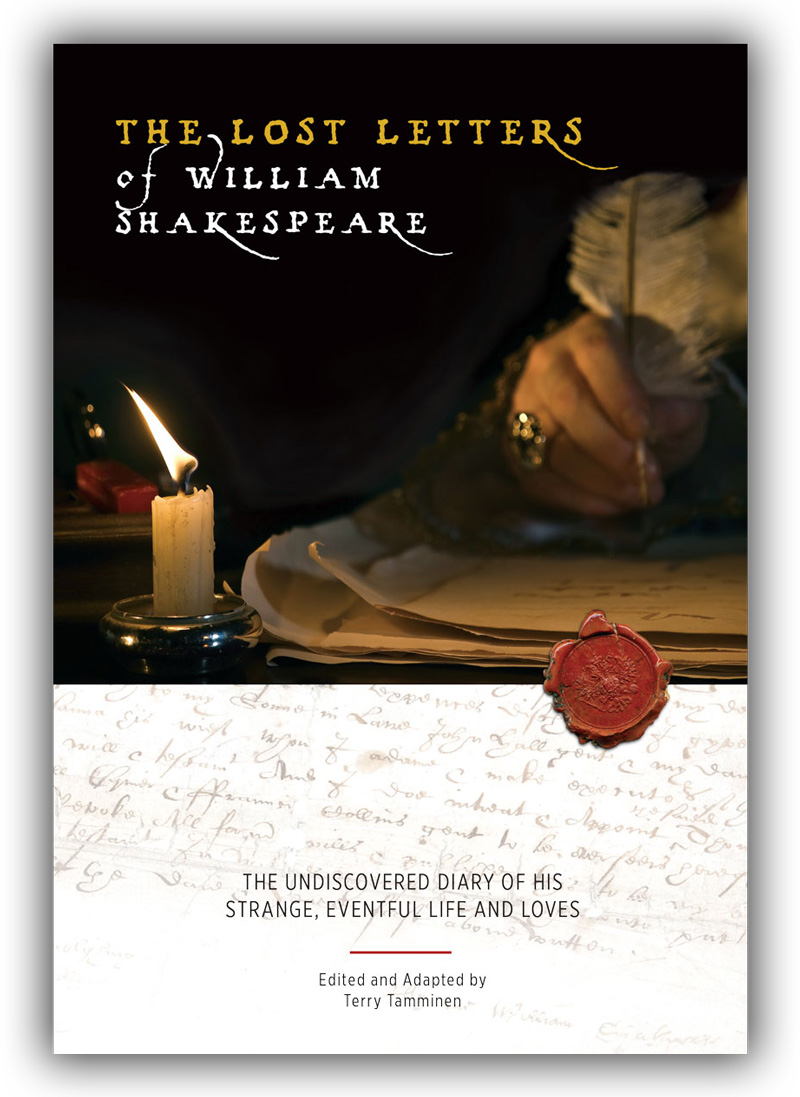 How a Sometimes Starving Actor Discovered Shakespeare’s Lost Letters and What They Reveal, Based on An Astonishing True Story

Could a treasure trove of 400-year-old letters constitute a previously unknown “diary” written by William Shakespeare? After 25 years of research, we believe the astonishing answer is yes. Knowing some people question who actually wrote the plays and others even question if he ever existed, we know these letters will add to that lively debate!

The Lost Letters of William Shakespeare are the first sixteen of these fascinating letters covering those “lost” years, written by Shakespeare to his lifelong friend John Combe. The letters provide extraordinary detail, because we learn that Shakespeare left home bound for the New World, where he hoped to restore is family’s fortunes, but knowing how risky the journey would be, he wanted to create a record for his two-year-old son (Hamnet) so that, one day, Hamnet would know why his father left home (especially in case Shakespeare was unable to return). Although he never made it to North American shores, these letters uncover the truth about the earliest pilgrims and reveal that Shakespeare was kept closer to home to fight in a pivotal battle for England against Spain (and that he used his theatrical talents to help win it). Overall, these remarkable letters represent a wealth of as-yet-undiscovered knowledge about Shakespeare’s relationships, personality, and career as he carves out his place in the chaotic world of 16th-century London, describing vibrant details from his arrival in London to the premiere of Titus Andronicus, his first play to be staged.

In 1989 I was an actor and performed a one-man play about the life of William Shakespeare in London. “Miss B”, an elderly woman who had seen the play more than once, was apparently sufficiently impressed by my impersonation of the Bard that she offered to show me some old, never-published letters that she believed were written by William Shakespeare. Although I was initially skeptical, it was an offer too good to pass up and, to be honest, as a struggling actor in those days, I didn’t have anything better to do with my time! We met almost daily for several weeks and what I discovered began to unravel almost everything I thought I knew about the great poet and playwright.

The Prologue to The Lost Letters of William Shakespeare: The Undiscovered Diary of his Strange Eventful Life and Loves (publication Fall 2017) describes our meetings, more about my mysterious benefactor, and how I spent over two decades since then decoding and researching what these letters had to say.

In brief, Shakespeare left his hometown of Stratford-upon-Avon in 1586 as a jack-of-all-trades for a troupe of traveling players. His goal was to get to London for one very astonishing reason in the hope of restoring his family’s honor and finances. He wrote the letters to his friend John Combe, but intended them as a record of his journey, including the whys and wherefores, so that his son, Hamnet (two years old in 1586) would know his father in the event he was unable to return. Because he wanted to “report his cause aright”, his letters are remarkably detailed and intimate.

Although Hamnet never apparently saw these letters (and Shakespeare did return home) we are the beneficiaries of his observations of life in Elizabethan England; first-hand secrets about the rulers of the land (and those who sought to rule); his participation in the war with Spain that could have changed history (and why we would be speaking Spanish in America today, among other alternate possible outcomes); bitter truths about his father, wife, and patrons; identities revealed of a Dark Lady and a heroic lady loved and lost.

What Do the Lost Letters Reveal?
There are over ninety letters in total, which have been organized into three books. Book One includes sixteen letters covering the years 1586 to 1589, from the time Shakespeare leaves his hometown of Stratford until the time he establishes himself as a playwright in London.

Letter 1: July 4, 1586
We meet William Shakespeare as a young man of 22. His story begins in a realm in religious turmoil, governed by kings and queens that have been, in quick succession, Catholic, then Protestant, then Catholic, then Protestant again. England under Queen Elizabeth is trying to forge a stable national identity, rout out any remaining Catholic sympathies, and claim a place among other nations, like France and Spain, which are reaping rich rewards overseas. Commoners have to contend with daily hardships, strict political and religious loyalties, and the grip of Bubonic plague. Shakespeare leaves his ancestral home, his family trade as a glover (maker of fine leather gloves), and his wife and three children. He sets out to make a living by working as a “jack-of-all-trades” for a theatre company, the Earl of Leicester’s Men. He reveals that his true intent is to earn passage on a ship to the New World (America), where it is commonly believed any hardworking man can make a fortune in gold, where a Shakespeare can restore the finances and good name of his troubled family.

Shakespeare writes both lovingly and disparagingly of his father and his wife Anne, but we do not yet fully understand why he has such conflicted feelings about his home (answers appear by Letter Eleven). To detail his journey, Shakespeare writes letters to John Combe, his boyhood best friend, a moneylender who lives in Stratford. Shakespeare wants to ensure that there is an accurate record of his life, so that if cannot return, his son Hamnet (two years old at the time Shakespeare leaves) knows what became of his father and why he had to leave in the first place.

Against this backdrop of the tidal forces of family and country, Letter One introduces us to a scared and unsure “Shake-piss,” so nicknamed by his fellow actors for his indigestion (or terror, or both) at the start of his journey. He writes about the members of the theatre company, the players, a collection of distinct personalities, disparate allegiances, and various talents. Shakespeare harbors intense hatred for the patron of the company, the Earl of Leicester, but we must read further into the diary to understand the cause (answers come by Letter Six). Shakespeare’s childhood education, and his training as a scribe and apprentice to his father prove useful when Master James Burbage, the head of the theatre company, asks him to make copies of plays in order for the players to learn their lines, and to help “mend” plays (rewriting scenes to update or adjust the story). Although there are tensions with Burbage’s son “Boy” Richard, Shakespeare gains some acceptance after fashioning a pig’s bladder filled with lamb’s blood to be used as a hidden prop in a grisly fight scene.

With this shaky beginning, the following letters of Book One wipe away centuries of fog regarding Shakespeare and how his unexpected, very human path to greatness captured the times that shape who we are today.

Letter 3: August 1, 1586. A routine day among the players is described, but the tale of a valiant Englishmen against the Turks renders it as memorable as certain advice from dear Uncle Henry.

Letter 4: September 20, 1586. Francis Drake’s stolen riches from America excite Shakespeare, whose soul may be more at risk over a stolen map of those realms than the new threat to his body from a galloping Plague.

Letter 5: October 31, 1586. The players act for a drunken Prince in Denmark, but memories stir of life with a drunken father in Stratford.

Letter 6: November 11, 1586. The Virgin Queen is attacked by foreign dogs and the Shakespeares find their kinsman’s head on a pike.

Letter 7: November 18, 1586. Our Stratford lad beholds a London bridge fantastical, a city of human gallimaufry, a Theatre like no other, and a brother long lost.

Letter 8: December 10, 1586. Shakespeare learns how his wife is struggling in Stratford and why his company of players in London is so dangerously divided by faith.

Letter 9: January 14, 1587. Death comes near, but a shrewd physician and a bundle of books provide an adequate defense, just in time for the patient to claim a great prize.

Letter 10: May 1, 1587. A passage to the New World with an unlikely companion is foreclosed, but new worlds of love, and on the stage, are unexpectedly opened.

Letter 11: September 9, 1587. Shakespeare visits Stratford, but finds you cannot so easily go home, while his Protestant homeland may be overthrown by Catholic Spain and every man will soon be a player in that life-or-death drama.

Letter 12: December 15, 1587. Some players fight and die, but others perform for the Queen and her powerful Earls as the Spanish thunder of war grows to an inescapable roar.

Letter 13: April 25, 1588. Players prepare for battle with real canon and swords and find that leave-taking from your favorite city, or loved ones, is never simple.

Letter 14: September 15, 1588. Spain invades England so the players must march to Tilbury, where some are made ghosts, but one spirit walks again among the living.

Letter 15: December 25, 1588. Joys and sorrows collide; some precious lives come to an end; and Shakespeare must decide to be, or not to be.

Letter 16: April 23, 1589. Two loved ones are laid to rest, but from a tragedy played upon a stage, the new playwright discovers the power and solace of the pen.

READ THE LOST LETTERS: Would you like to be among the first to read Shakespeare’s full story, in his own words, that was lost in an archive for over four centuries?