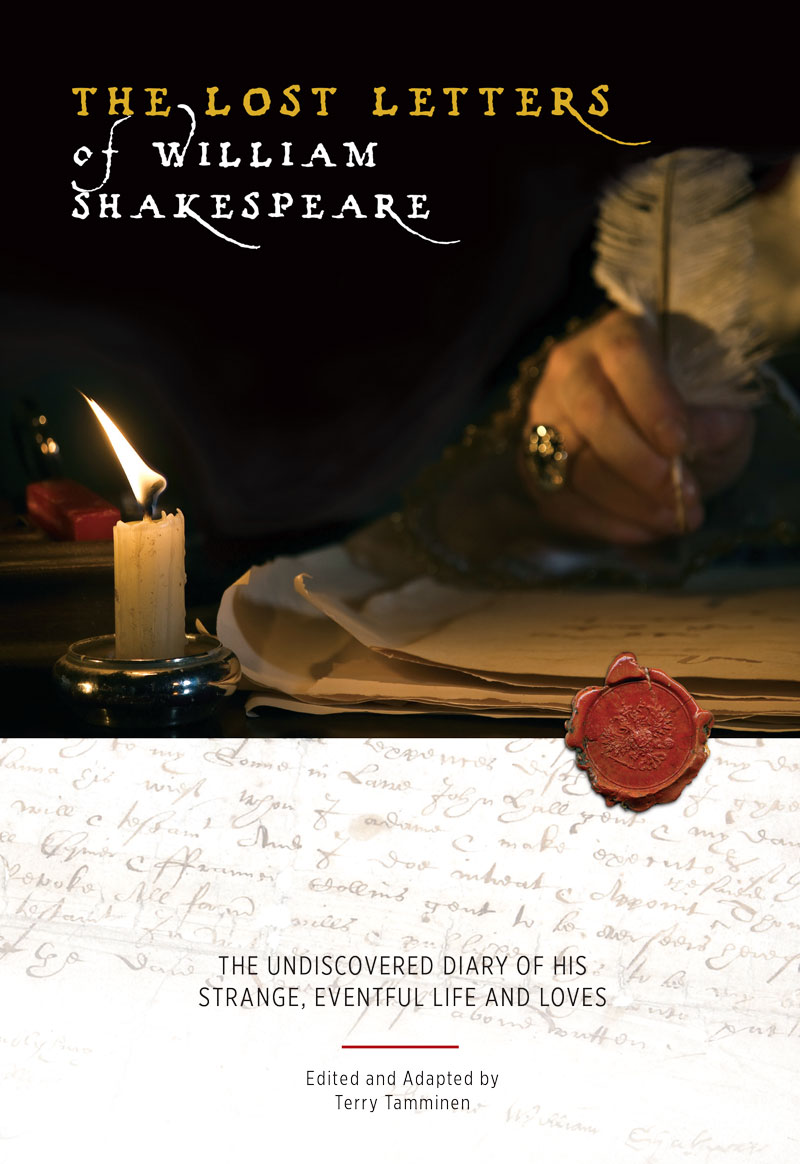 As recounted in the Lost Letters, William Shakespeare’s youth seems part fairy tale, and part horror story, but as the colloquial saying goes, “Truth is stranger than fiction.”  Writer Jeanette Winterson notes that often the measure of love is loss, and Shakespeare’s early life was no exception; Shakespeare’s elation at discovering a soul mate in the fiery red-haired Rosalind Munday, and his agony at losing her are palpable in the Lost Letters. Any of us who have felt a spark of desire, or a shade of grief will sense the pulse and throb of what could only be Shakespeare’s lived experience.

Shakespeare’s consternation about his lawful wife Anne Hathaway further burnishes the Lost Letters with the patina of truth: Shakespeare pined to be free with his illicit lover Rosalind and tried to sail away to America with her, but he also came to grudgingly appreciate his steadfast wife Anne. Shakespeare despised that Anne had slept with his own father John Shakespeare, but he also respected Anne’s industry and labor to keep the family fed, and her role as a mother to William’s daughter Susanna (who was actually William’s half-sister), and to William’s twins. When scholars wonder what William Shakespeare was up to during the so-called “lost years” (the time period from when Shakespeare left home for London to when he wrote his first play), I doubt they had this love triangle in mind, but clearly, the intricate tangle was an original rich fuel for Shakespeare’s legacy of transcendent poetry and plays.

The Lost Letters are alive to me because of all they say about love, in its real and imperfect glory, but also because love begets faith: I trust my husband’s accounting of the provenance of the Lost Letters. I first met Terry around a campfire on a river-rafting trip, where he performed Richard III’s soliloquy entirely from memory, the firelight on his face. When I finally re-met Terry years later, he was in government service, and Shakespeare seemed the farthest thing from his environmental accomplishments. By the time he told me about the Lost Letters, I had already come to know that while most of us (if we are lucky) get to experience one extraordinary thing in our lives, Terry was an exception, and his life was replete with an amazing range of incredible moments. He has a kind of humble, personal magic many native peoples would call “mana.” And whatever he does, he does better than most. I had studied literature and a fair amount of Shakespeare, so armed with that knowledge, and my faith in my unusual husband, I was prepared to believe everything the Lost Letters could conjure.

Even so, I had doubts. To be sure, I mostly liked this new William Shakespeare I was discovering.  Shakespeare’s Lost Letters were beautifully written, detailed, forming a nuanced diary, penned for Shakespeare’s young son Hamnet with the expectation Shakespeare would be journeying far from London, perhaps never to return. Terry provided a host of convincing historical references to the Letters, and I recognized many linkages between the Lost Letters and Shakespeare’s own works.  The pages echoed with a heartbeat that seemed real enough, and yet despite all this…elements of the story seemed fantastical, so impossibly theatrical, it simply strained credulity. For example, a kind and learned housekeeper with no arms?! Defying the invading Spanish Armada with a ruse about a burial of a plague victim?! A secretly Jewish girlfriend who masquerades as a boy?! And then there were pressing practical questions:  Did Miss B., the mysterious lady who showed the Lost Letters to Terry, really work at Buckingham Palace? (I hope publishing the Lost Letters will help to locate her). How did all the letters originally get from Stratford to London (the endnote about William Ireland gives a plausible explanation). How did all the dialogue in the Letters get preserved so Shakespeare could quote it precisely, years later? (In Book Two of the Lost Letters (as yet unpublished by Terry), Shakespeare reveals the Letters were kept by his good friend John Combe, that Shakespeare did have access to the Letters over the years, and that Shakespeare did consult them when writing his works). What to believe?

Ultimately, it was an obscure set of facts—facts that do not appear anywhere in the Lost Letters themselves—that tipped my scale unyieldingly to belief in the authenticity of the Lost Letters. The Lost Letters tell us that Shakespeare snuck in the dead of night on Christmas Eve 1587 to secretly bury his lover Rosalind and their newborn son in a portion of the St. Giles Church graveyard. What the Letters do not reveal—but what is documented in other historical records of the time—is that later in his life, William Shakespeare tried (unsuccessfully) to also bury his beloved younger brother Edmund at the St. Giles Church. St. Giles Church was not an obvious choice for Edmund’s final resting place, and the custom of the day would have been for Edmund to be buried at a church near the family home (Stratford-Upon-Avon) or in Edmund’s own London neighborhood parish. We also know (from other historical accounts separate from the Lost Letters) that, for his entire life, whenever visiting London, Shakespeare never resided more than a mile from St. Giles. Historians have not particularly associated Shakespeare’s London whereabouts with St. Giles, nor offered a satisfying explanation for why Shakespeare sought to bury his brother at that church, but given the context of the Lost Letters, the only reason can be… love.  I can think of few things more truthfully human than the desire to have loved ones together, even in death.

Consequently, in 2017, when University of Pennsylvania Professor of Engineering Alejandro Ribeiro ran his linguistic authentication logarithms on the Lost Letters, and reported back that it was a 95% match to Shakespeare’s known works, I was not surprised.  Even as I write, new discoveries from the UK National Archives corroborate details of Shakespeare’s accounting of his life in the Lost Letters; there are likely many more historical records (maybe even the Letters themselves?) tucked away like Raiders of the Lost Ark talismans in the warehouse of the Cheshire salt mines, or in the dusty archives of Buckingham Palace.  Given the gravamen of love and science, I’d prefer to identify the Lost Letters as historical fact, not merely historical fiction, but as he explains in the Prologue to the Lost Letters, Terry chose differently. Given the skepticism of established publishing houses that the Lost Letters might be an elaborate contemporary con or a contrived fraud of antiquity, I understand and support his choice.

In the end, I hope The Lost Letters of William Shakespeare will be accepted and appreciated as William Shakespeare’s telling of his own life, and especially, the true love of his youth: before the Dark Lady of later sonnets, before the fame of Romeo and Juliet, before Shakespeare’s status as an ultimate classical icon, there was Rosalind. Truth has a sort of gravity that can bend time, and now William Shakespeare and Rosalind Munday are no longer lost to the past. They finally share what escaped them in life: to be known, and immortalized together, forever in love.